Home Behind the ScenesAustralian Grown Herbs

These Australian grown dried herbs have to be experienced to be believed.

When a herb is dried correctly, the moisture content is greatly reduced, and the volatile oils that give these herbs their flavours are concentrated, and remain stable when exposed to the heat of cooking.

Fresh herbs have delicate volatile ‘top notes’ that are easily dissipated by extreme heat or prolonged cooking. For this reason we use fresh herbs in dishes that are not cooked for very long, such as omelets, scrambled eggs, Asian stir-fries and soups, and to garnish many dishes at time of  serving.

Dried herbs have flavours that readily infuse during cooking. Think of all those herbal teas that are comprised of dried leaves, flowers and other dried ingredients, all of which infuse readily in hot water. Therefore, we use dried herbs in slow-cooked dishes like casseroles, roasts and soups. We can also use a dried herb when we want a strong flavour. For example you will find Greek salads and many other Greek dishes will be garnished with rubbed dried oregano leaves. The result; a delicious peppery yet herb-like pungency that balances beautifully with the dish. Ground dried rosemary works wonderfully on lamb cutlets and roasts as it rubs on the meat’s surface and enhances the flavour during cooking.

One look at these amazing Australian grown dried herbs from Glenelg River Herbs in Balmoral, Victoria, will show you that they are superior in every way. 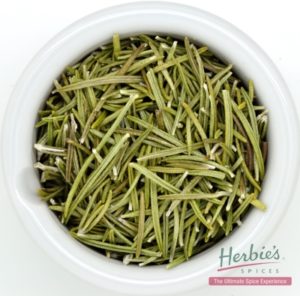 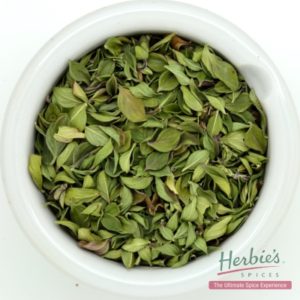 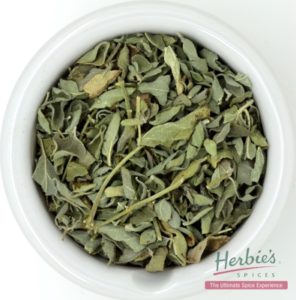 Our Australian dried herb supplier is based in western Victoria, and we have just received these photos of the crops that are ready to harvest and dry. 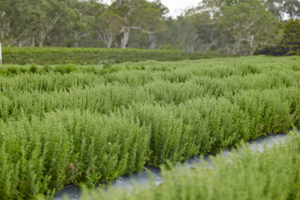 Rosemary is a hardy, sun-loving perennial shrub. Each leaf is dark green and glossy on top with a longitudinal crease down the middle. Its edges have the appearance of being neatly rolled down. The leaf underside is dull, pale gray-green, and concave with a central rib underneath. When viewed from this angle, its rolled edges make it look like a miniscule canoe. The leaves of upright rosemary are about 2.5 cm long,

Rosemary leaves, when bruised, give off an aroma that is fragrant, pine-like, cooling, minty and refreshingly head-clearing with hints of eucalyptus. Their flavour is astringent, pine-like, peppery, warming, woody and herby, with a lingering camphor-like aftertaste. When dried, the rolled edges of rosemary leaves curl tightly in minute scrolls, losing their flat appearance and becoming like hard, curved pine needles. These are often cut into 0.5 cm lengths to make them easier to use. When dry the flavour remains pungent, woody and pine-like. Ground rosemary leaves are a convenient way to add the flavour of rosemary to a wide range of dishes. 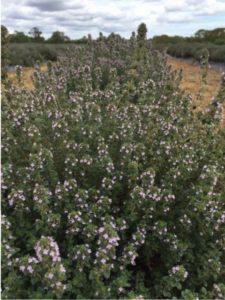 Although there are over 100 varieties of thyme, including many hybrids, it is really only common garden thyme and lemon thyme that are of culinary significance. Ornamental types that are rarely used in cooking include Westmoreland thyme, golden thyme, silver posy thyme, gray woolly thyme, variegated lemon thyme and caraway thyme. Garden thyme is a small perennial shrub that may vary widely in appearance depending upon the soil and climatic conditions it is growing under. Generally this variety of thyme is stiff and bushy in appearance with many thin erect stalks that are covered by pairs of small, narrow, elliptical gray-green leaves, sometimes reddish rust–colored on the underside, 5–6 mm long. Pinkish white–lipped flowers are particularly attractive to bees and are borne in whorls at the tips of the branches. The aroma of thyme is pungent, warming, spicy and agreeable. Its flavor is similarly pungent and warming with a lingering, medicinal, mouth-freshening sharpness that comes from the presence of an important volatile oil, thymol.

Lemon thyme is a cross between garden thyme and the large wild thyme and is a smaller plant of similar structure but smaller. Its leaves are greener than those of garden thyme, and although less pungent in flavor, have a particularly appealing lemon tang that compliments chicken and seafood. 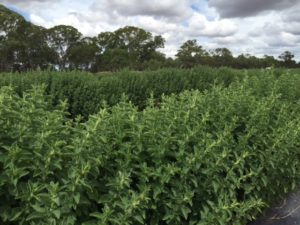 Oregano is a robust and spreading plant. It thrives as a perennial in most climates, grows to around 60 cm tall, has roundish leaves and is covered by a down of fine hairs. Oregano has a piercing scent and and its flavour is strong, in keeping with its bold appearance. When dried, oregano has a pleasing depth of taste with a distinct, sharp, peppery element to it.

There are a number of different types of Origanum that grow wild in Greece and are variously referred to as rigani. The flavors and, to a lesser degree, the appearance of the different types of oregano can vary greatly depending upon climatic and soil conditions. This Australian grown oregano is the best, most beautifully pungent oregano we have ever seen. 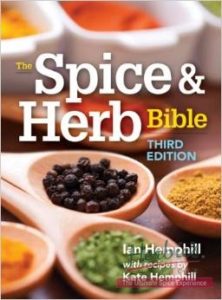