Home Behind the ScenesThere’s More to Cloves than Christmas

When studding the Christmas ham with cloves last year, in preparation for coating with our special glaze, we thought people may be interested to know some facts about this wonderful spice.

Following is an extract from Spice Notes & Recipes by Ian Hemphill with recipes by Kate Hemphill. Although this edition is out of print it has been replaced by The Spice & Herb Bible 3rd Edition, also by Ian & Kate.

Whole cloves (Eugenia caryophyllata) as we know them are the dried, unopened flower buds of an attractive, tropical evergreen tree which reaches about 10 m in height and has dense, dark-green foliage. The trunk of a clove tree is around 30 cm in diameter, and usually forks near the base into two or three main branches of very hard wood with grey, rough bark. The lower branches often die back, and when they are closely planted, these conical-shaped trees form a magical aromatic canopy. New leaves are bright-pink, and mature with a glossy, dark-green upper surface, the underneath being paler green and dull. Clove buds are borne in clusters of 10–15, and are picked when they have reached full size, though still green and just starting to turn pink – reminding one of the unopened eyes of baby marsupials. If the buds are not gathered, they will flower and turn into oblong, drooping fruits known as ‘mother of cloves’, which have no use in the spice trade. 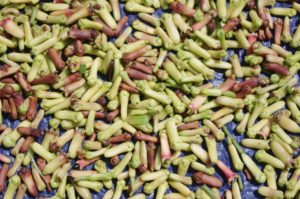 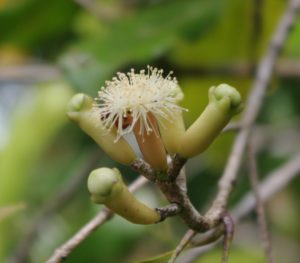 Clove Buds on the Tree 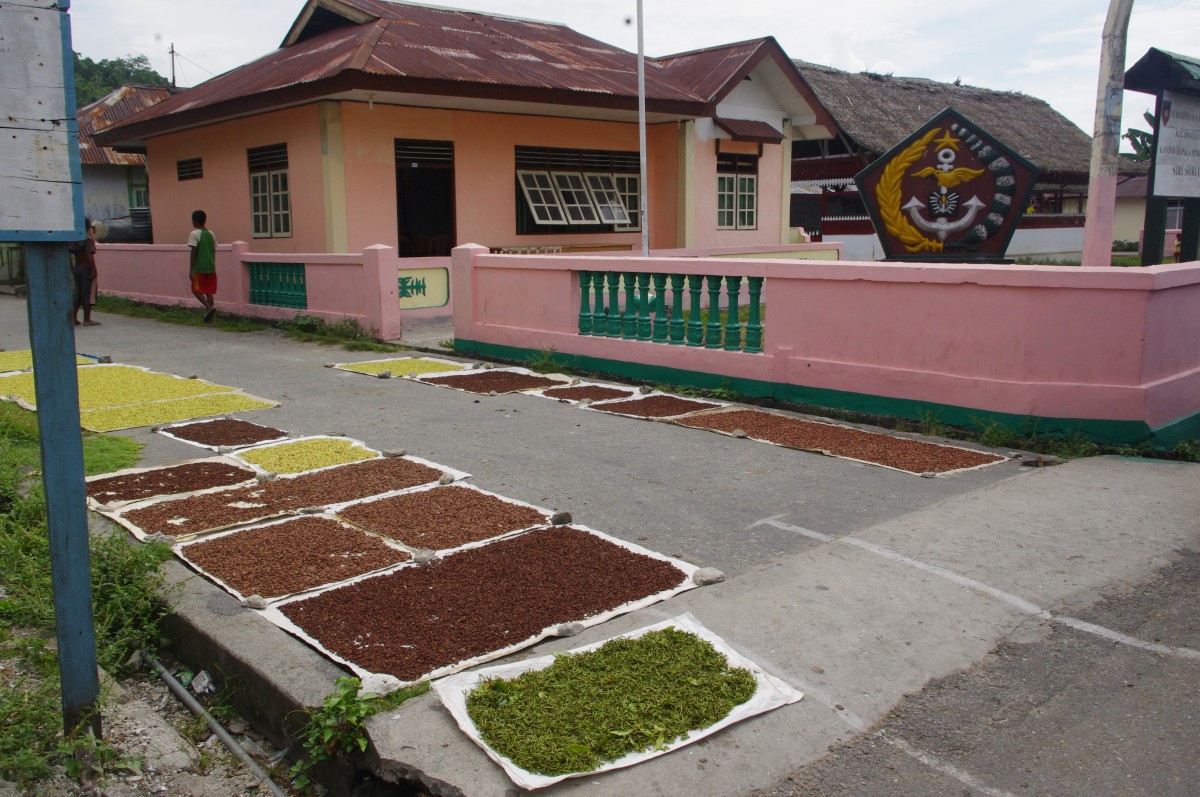 When dried, cloves are reddish brown to dark brown in colour, approximately 10–15 mm long, nail-shaped and tapered at one end. Interestingly, the name clove derives from the Latin clavus meaning ‘nail’. In German nelke means ‘little nails’, and the Chinese ting hsiang means ‘nail spice’. The ‘bud’ end has a friable, paler ball appearing to sit atop four engagement-ring-style clasps. The aroma of cloves is pungent, warm, aromatic, camphor-like and faintly peppery. The flavour is intensely pungent, and words like medicinal, warming, sweet, lingering and numbing come to mind. When used in moderation, cloves bring a pleasing, palate-cleansing freshness and sweet spicy flavour to food. 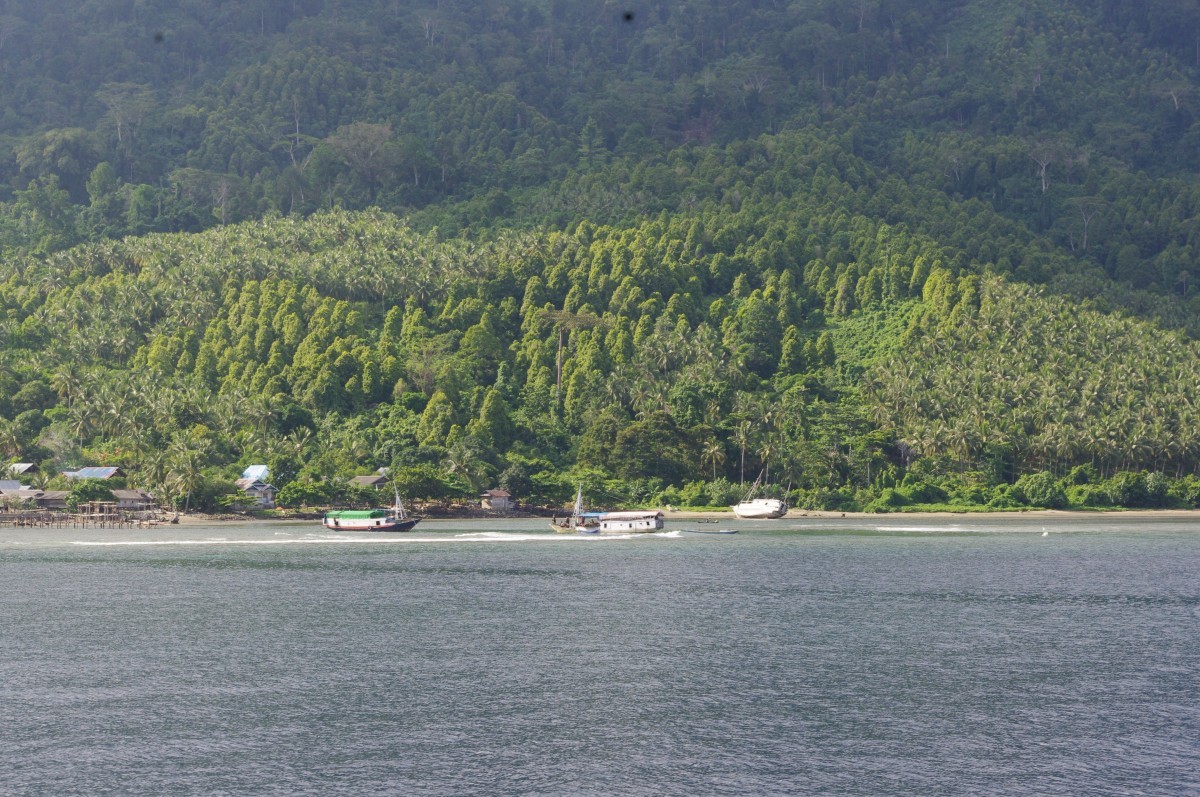 Clove Trees on Obilatu in The Spice Islands

Cloves are native to the eastern Indonesian islands referred to as the Moluccas (including Ternate, Tidor, Motir, Makian and Batjan). In an extraordinary archaelogical discovery in Syria (ancient Mesopotamia), the remains of cloves were found in a domestic kitchen site, dating back to around 1700BC. (Source – Spice: The History of Temptation. New York: Knopf, 2004)  One can scarcely imagine the journey those cloves made from the Moluccas by sea and land and the number of hands they would have passed through on their way to their final destination. Cloves are believed to have been introduced to China during the Han dynasty (206 BC–AD 220). They were probably the first form of breath freshener, as it was recorded that courtiers held cloves in their mouths to sweeten the breath when addressing the emperor. Cloves were a caravan import known to the Romans and were brought into Alexandria in the second century AD. By the fourth century AD this spice was well known around the Mediterranean and by the eighth century throughout Europe. The Arabs, who traded cloves from centres in India and Ceylon, kept the origins of their precious cargo a closely guarded secret.

Following the Crusades in Europe, disease and plagues were commonplace and there was a constant search for spices that could sweeten the air, which must often have been full of the stench of death. Cloves were found to have a natural antiseptic effect, and the pungent oil gave quick relief from toothache. By the 13th century, people were making pomanders (apples or oranges studded with cloves) to carry on them to ward off the plague.

On his return from the Orient in 1297, Marco Polo recalled having seen plantations of cloves on East Indian islands in the China Sea. Columbus sailed west in search of these spice islands but instead found the West Indies. Five years later, Vasco da Gama sailed around the Cape of Good Hope to India on the same search, and obtained cloves in Calicut (Calcutta), a trading centre that had probably brought the cloves from the East Indies.

From 1514 the Portuguese controlled the clove trade and the search for spices in general was on in earnest. In 1522 the only surviving ship of Magellan’s circumnavigation fleet returned to Spain with 26 tonnes of cloves, more than enough to pay for the entire cost of the expedition. The captain, Sebastian del Cano, was rewarded with a pension and a coat of arms comprising three nutmegs, two sticks of cinnamon and 12 cloves. The Portuguese monopoly in the Moluccas was broken by the Dutch, who expelled them in 1605 and ruthlessly maintained control for another 200 years, using cruel and gruesome measures. Part of the Dutch strategy to maintain high prices for cloves was to restrict by law the cultivation of cloves to the island of Amboina, uprooting and burning trees growing on other islands. The death penalty was imposed on anyone cultivating or selling the spice anywhere except Amboina. Nonetheless from 1750 to the early 1800s numerous attempts were made to break this stranglehold on the clove trade. Most successful was the superintendent of Ile de France (Mauritius), an intrepid Frenchman named Pierre Poivre (the original Peter Piper of the nursery rhyme), who smuggled some ‘mother of cloves’ out of Amboina and propagated a small number of trees. With varying degrees of success, clove plantations were established on Réunion, Martinique, Haiti and in the Seychelles. With the abolition of slavery gaining momentum, Zanzibar had a surplus of slaves until an Arab by the name of Saleh bin Haramil al Abray established clove plantations for the slaves to be put to work on. What was not lost on Saleh bin Haramil al Abray was the successful breaking of the Dutch monopoly on the clove trade by Pierre Poivre. Sultan Said of Oman ruled his kingdom from Muscat, however, in 1827 he sailed to Zanzibar and made a commercial treaty with America, mostly involving the trade in ivory. He soon realised, though, that to grow Zanzibar’s wealth he would have to increase trade with America and Europe and identified the clove trade as a means to achieve his objectives. The ill-fated Saleh bin Haramil al Abray had all his plantations confiscated because Sultan Said saw him as a political threat. Sultan Said then decreed that three clove trees would have to be planted for every coconut palm on Zanzibar and Pemba, making Zanzibar one of the world’s largest producers by the time he died in 1856. Despite a major setback with ‘sudden death disease’, which attacked mature trees, Zanzibar became – along with Madagascar – one of the world’s major clove producers.

The first harvesting of cloves takes place when the trees are six to eight years of age and continues then for up to 50 years; some trees reportedly live for up to 150 years. The trees are surprisingly sensitive and will usually only deliver one bumper crop in four years, the success of following crops being largely dependent on the degree of sympathy employed in the previous harvest. Rough handling and breaking of branches will generate debilitating shock in clove trees, diminishing subsequent yields. In Sir James Frazer’s famous work, The Golden Bough, he described the attitude of the native people to their crops: ‘When the clove trees are in blossom, they are treated like pregnant women. No noise may be made near them; no light or fire may be carried past them at night; no-one may approach them with his hat on, all must uncover in their presence. These precautions are observed lest the tree should be alarmed and bear no fruit, or should drop its fruit too soon like the untimely delivery of a woman who has been frightened in her pregnancy.’ Although modern attitudes have changed, the planting and harvesting of cloves still has religious significance in some villages.

Clove clusters are picked by hand when the buds are at full size, but before any petals have fallen to expose the stamens. As they do not all reach harvesting stage at the same time, a picker must be skilled enough to know the best clusters to pick and put in baskets. The filled baskets are returned to a central area, where the flower buds are removed from the flower stems by twisting the cluster against the palm of the hand. The snapped-off buds are spread out to dry on woven mats, where the tropical sun dries them in a few days to their characteristic reddish-brown colour. During drying, enzymes create the volatile oil eugenol, which is also present in lesser concentration in dried clove stems. A traditional way to gauge correct dryness of cloves is to hold them tightly in one’s hand and if they hurt, the spiky sections are hard, an indication of being properly dried. Having lost about two-thirds of their weight, one kilogram of cloves may consist of up to 15 000 buds.

Clove leaves are also harvested to produce clove leaf oil by steam distillation. This volatile oil is used in perfumery and food and beverage manufacturing. Because the harvesting of leafy branches for this oil seriously diminishes yields of cloves and makes the trees susceptible to fungal infection, it is not a common practice among the major producing countries.

When buying whole cloves, look for clean, well-presented buds, as this is one of the best indications of how much care has been taken in the harvesting process. Each bud should be intact, still retaining the little soft, friable ball on the top. Look out for short clove-sized sticks which are in fact clove stems. Clove stems contain about 30% of the volatile oil in a clove, and are one of the most popular ways for unscrupulous spice traders to adulterate their goods. Another ‘trick of the trade’ has been to boil cloves in water to extract some of the oil, after which the depleted cloves are dried and sold. Only buy ground cloves from a reputable establishment that can assure you they have been recently milled, as when they’re ground, cloves lose their volatile oil fairly quickly. Ground cloves should be dark brown, because light-brown powder that is somewhat fibrous and gritty is probably heavily cut with ground clove stem. Store whole and ground cloves in airtight packaging and keep away from extremes of heat, light and humidity.

In Indonesia ground cloves are mixed with tobacco to make ‘kretek’ cigarettes, which crackle as they burn, and give off a distinctive aroma. To encounter the smell of a ‘kretek’ cigarette anywhere in the world immediately transports one back to Asia. Cloves are the essential component in a clove orange, or pomander (see P. 272), a dramatic example of the antibacterial qualities of cloves.

Because of their high pungency, cloves must always be used sparingly in cooking as too much can easily overpower a meal. Even though care is to be taken in their application, it is hard to imagine a host of traditional foods, including apple pie, ham, stewed fruit and pickles, without the addition of cloves. In Denmark they are an ingredient in the popular ‘pepper cake’ and are frequently added to exotic Arabian dishes. A popular mulled wine of the Middle Ages called ‘hippocras’ was made with ginger, cloves, and other spices. Right up to the present day, the warming spiced wines of Europe and Scandinavia are flavoured in the same way. Cloves are used in Indian and Asian curries and, as a truly international spice, can be found in the kitchens of every continent of the world. 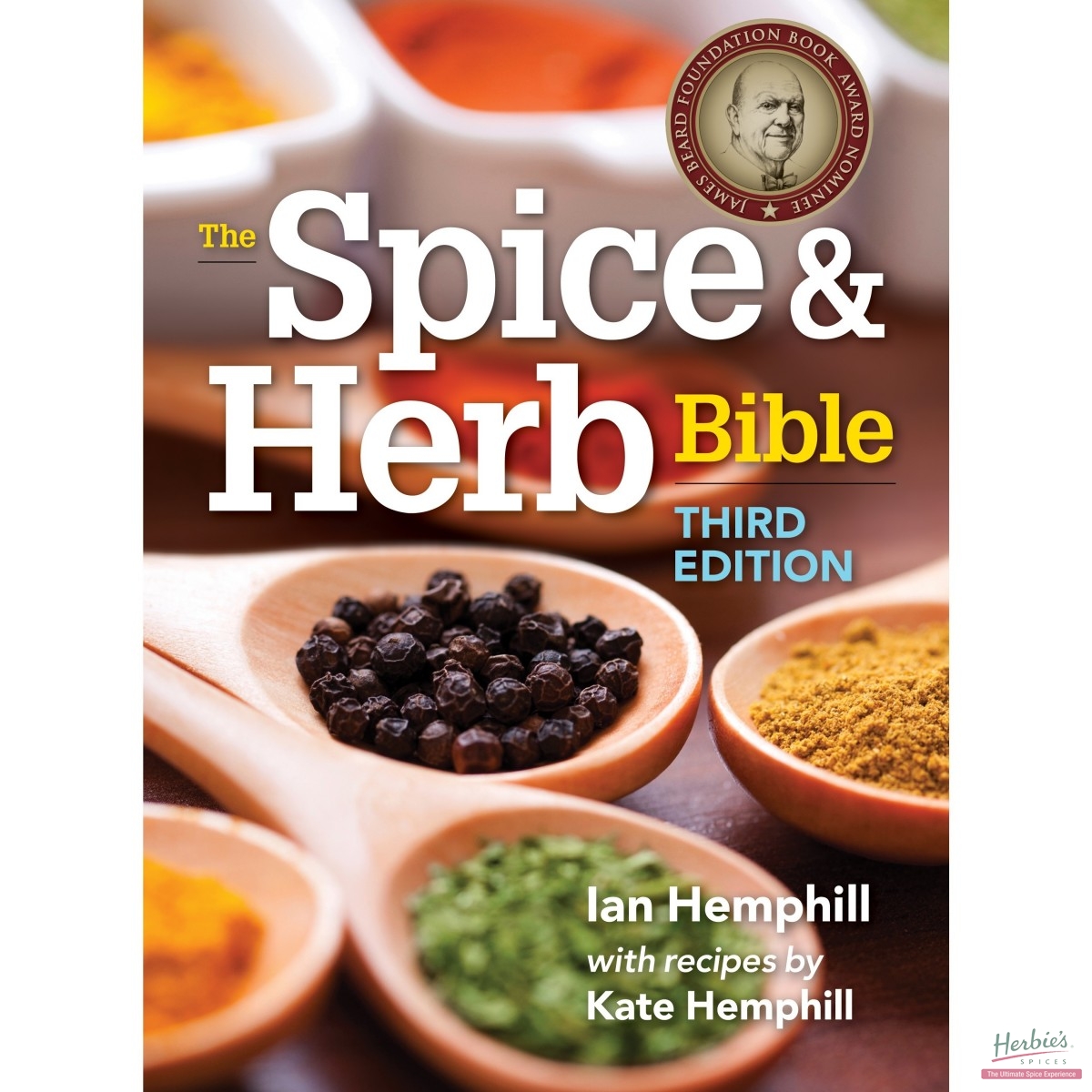