Where do our own Australian native herbs and spices fit into what is considered to be Australian Cuisine?

European migration, especially post World War two when we were introduced to Mediterranean flavours, had a profound effect on eating habits. This was followed by Chinese, Southeast Asian, Indian and Middle Eastern influences, and it is widely acknowledged that these laid the groundwork for what is often referred to as “mod-oz.”

Although these wonderful fusions have created a style of food found in numerous Australian cafés, restaurants and homes, it is timely that we now see the increased use of native Australian spices and herbs in everyday home cooking.

Over the last 20 years there has been an emerging interest in the commercial opportunities provided by edible Australian plants (often referred to as “bush tucker”), including spices and herbs used to enhance the flavour of food. Australia is a vast continent, and most non-indigenous people would perish quickly in the rugged environment without adequate supplies of familiar life-sustaining produce. To many observers, it appears to be a miracle that the Australian Aborigines survived in such a harsh setting for countless generations. Yet their ecosystem is abundant when you know where to look. Restaurateurs around Australia have been bringing the wonders of native flavours to Australians and tourists alike; nevertheless, widespread use of Australia’s native flavours developed very slowly in the latter years of the 20th century. 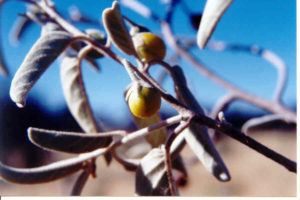 There are some fundamental reasons for this. First, unlike conventional herbs and spices, which have been used to season and preserve food in many cultures for centuries, Australia’s native herbs and spices have a sketchy history of being used as seasonings. The indigenous people are known to have used them for sustenance and for their medicinal and spiritual properties, but there are few examples of Australian native spices being used by the First Australians to flavour food.

Native spices also bear the burden of “gimmick appeal.” Their novelty value has helped to generate worldwide awareness, but the image of “bush foods” is at odds with the way cooks see themselves preparing everyday meals. This pigeon holing of these flavours limits one’s appreciation of how widely they can be used. Even though cloves are native to the Indonesian archipelago, we don’t say we are cooking Indonesian when we stud cloves into the Christmas ham! Therefore, when we use lemon myrtle in a Laksa or Wattle seed in a Cheesecake crust, we don’t have to say that’s bush-tucker!

A third barrier to the success of these indigenous flavors relates to the cooking methods required for most Australian spices. Many have delicate fresh top notes that cannot sustain long cooking periods; others, when used in too large a quantity, can leave a strong camphor-like taste in the food. A basic understanding of how to use these spices overcomes this problem — not too difficult if you can imagine the result of using too much pepper, chili, cardamom or cloves in a meal. The skills we have acquired through generations of traditional spice use can be applied equally to Australian native flavors, so that using akudjura (bush tomato) or lemon myrtle leaves will eventually become no more mysterious than adding chili, cloves or lemongrass.

Because Australian cuisine uses nearly every culinary spice and herb in some way, the following list of spices and herbs is a selection of the flavours, both indigenous and introduced, that when combined help the cook replicate a quintessentially Australian food experience. These spices, used on red meats, white meats, vegetables and grains, evoke the stark, non-contrived openness of the Australian psyche.

Blend these spices and herbs together, rub onto chicken, fish or red meats with salt to taste before cooking, for a family friendly taste sensation: